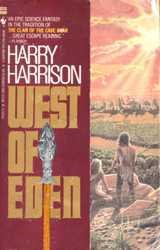 Serie: Eden
Genre: fantasy
Annotation:
About 65 million years ago, it is supposed that dinosaurs disappeared from Earth. But what if they had not been?

From a master of imaginative storytelling comes an epic tale of the world as it might have been, a world where the age of dinosaurs never ended, and their descendants clashed with the humans. The story is set in the Americas, where a clan of native humans survives by hunting and fishing. Suddenly they clash with a new race that comes from across the ocean — the lizards who are a much more advanced civilization, progressing not through technology, but through animal-breeding.
They breed new kinds of animals, each one serving as a machine designed for a specific purpose. A human teenager is caught by the lizards and survives in their city, first as an animal, then as a prisoner, then as a member of society. Still, his human instincts takes over and he betrays his masters, escapes and leads the humans to destroying the lizard city and driving them back across the sea.
Year: 1984 г.
Read this book now
Download in formats: fb2 330k, epub 424k, mobi 593k, txt, html