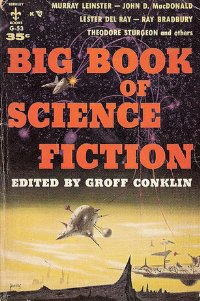 Eric Frank Russell is a towering Englishman whose first science-fiction stories were published in 1937. In the decades since then he has written dozens of notable short stones and such classic novels as Sinister Barrier and Three to Conquer. Cheerfully irreverent in person, Russell as a writer is usually breezy and hard-boiled, a teller of tough, fast-paced tales. He has dealt often and excellently with the theme of Earthman versus Alien, generally against a backdrop of an intergalactic war, and his sly spies were performing slick tricks long before James Bond first saw print.
But there is nothing breezy, hard-boiled, tough, military, or sly about Dear Devil. Seldom has a being from another world been portrayed in science fiction with such warmth and compassion. Readers are grateful to Eric Frank Russell for his lively stories of action and adventure, but they will cherish him forever for the unique and wonderful Martian “devil” of this unforgettable story.
Year: 1950 г.
Read this book now
Download in formats: fb2 61k, epub 62k, mobi 104k, txt, html

I don't quite remember why this should be here.