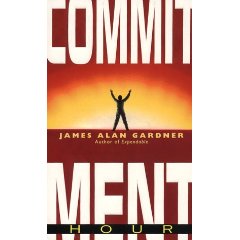 Оценка: 4.5 (19)
Serie: League of People
Genre: space fantasy
Annotation:
Commitment Hour is a science fiction novel by James Alan Gardner, published in 1998. The novel is set in Gardner`s 'League of Peoples`s' futuristic universe, and plays out in the small, isolated village of Tober Cove. Set on post-apocalyptic Earth, Tober Cove most resembles a rural, seventeenth century fishing village, with one exception: every year, everyone below the age of 21 changes gender. At the age of twenty-one, the people of the village must 'commit' to being male, female or both in the form of a Hermaphrodite (a `Neut`), forever. Commitment Hour follows the day leading up to the main character`s hour of commitment (Wikipedia).
Read this book now
Download in formats: fb2 216k, epub 271k, mobi 410k, txt, html