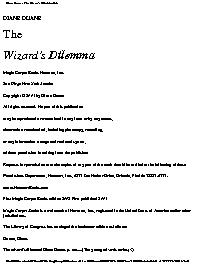 Serie: Wizard
Genre: fantasy, heroic
Annotation:
For the first time ever, friends and wizardly partners Nita and Kit seem to be having trouble communicating. They argue over a spell to clean up the pollution in New York`s Jones Inlet, and from that point on, they can`t connect on anything. Is it adolescence that`s tearing them apart or something more profound?
Nita breaks away from Kit to work on her own for a while -- and then is jolted by a terrible and unexpected blow as her mother falls ill and is rushed into the hospital.
What`s even more horrifying for Nita than the mere fact of her mother`s illness is the possibility that nothing -- not surgery, not even wizardry -- will be able to keep her mom alive.
But Nita refuses to let her mother go down without a fight. Soon she`s on a mission to seek her mom`s cure: a journey that takes her across universes, and out of them, to the only place where she can learn the skills that may help her save her mother`s life. What she doesn`t foresee is the terrible way in which this journey will once again bring her face-to-face with the Lone Power, the source of all death in the universe.That Power has been Nita`s worst enemy since she first started her practice of wizardry. Now, though, the Lone One and the bargain It offers her may be her mother`s only hope....
Read this book now
Download in formats: pdf