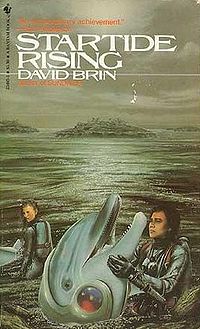 Оценка: 1.0 (1)
Serie: Uplift
Genre: fantasy, space fantasy
Annotation:
David Brin's Uplift novels are among the most thrilling and extraordinary science fiction ever written.   *Sundiver, Startide Rising,* and *The Uplift War* \--a *New York Times* bestseller--together make up one of the most beloved sagas of all time.  Brin's tales are set in a future universe in which no species can reach sentience without being 'uplifted' by a patron race.  But the greatest mystery of all remains unsolved: who uplifted humankind?
The Terran exploration vessel *Streaker* has crashed in the uncharted water world of Kithrup, bearing one of the most important discoveries in galactic history.  Below, a handful of her human and dolphin crew battles armed rebellion and a hostile planet to safeguard her secret--the fate of the Progenitors, the fabled First Race who seeded wisdom throughout the stars.
**
Year: 1983 г.