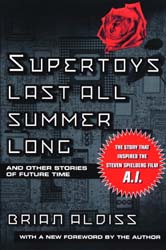 Оценка: 4.0 (6)
Genre: fantasy
Annotation:
It started a long time ago (in a galaxy far, far away), back in 1969, when British author Brian W. Aldiss published a short story in Harper's Bazaar, entitled Supertoys Last All Summer Long.  It challenged the whole public thought on machines and the idea of robots. And it also managed to pique the interest of director Stanley Kubrick. Kubrick acquired the rights to the story from Aldiss in November of 1982, and had hopes to make it into a feature film. Aldriss, however, was skeptical, noting, while Arthur [C. Clark]'s story looks outwards to the solar system, my story looks inwards,  referring to another of Kubrick's films, which was based upon Clark's short story, The Sentinel.  (Aldiss has written a very nice Foreword, entitled Attempting to Please,  preceding his latest book, Supertoys Last All Summer Long: And Other Short Stories of Future Time. The Foreword encompasses the joking  relationship he and Kubrick had. The book also contains the two sequels to the original story, as well as several other stories All fairly interesting, especially for science fiction readers.

Another disagreement that arose was that Kubrick had continually fashioned the story after Pinnochio,  which Aldiss strictly objected to I could not or would not see the parallels between David, my five-year-old android, and the wooden creature who becomes human. It emerged that Stanley wished David to become more human, and wished, also, to have the Blue Fairly materialise. Never consciously rewrite old fairy stories, I say,  Aldiss comments in his Foreword.

Aldiss was quickly wheeled out of the picture at about 1990. Kubrick took on Supertoys Last All Summer Long,  rechristened it A.I., and continued to work on his little Pinnochio -esque fairy tale, bringing in others, such as Sara Maitland and Ian Watson. (Visual-Memory.co.uk has compiled a nice little history of the Stanley Kubrick side of A.I., so I don't feel the need to write it, when they've already done a wonderful job. Click the link to read more.) Aldiss went onto other things. Then, in 1999, Stanley Kubrick passed away. During the past 9 years or so, Kubrick had kept his friend Steven Spielberg very involved in the film, the two of them faxing over 900 pages of notes back and forth. When Kubrick passed away, his brother-in-law Jan Harlan Kubrick decided to pass the film along to Spielberg, whom Kubrick frequently had said would be the perfect director for the film.

And so it was. Steven Spielberg started up on the film, scrapping the numerous other scripts and treatments which Stanley Kubrick had gathered, and completely rewriting the script solely by himself, his first screenwriting job since Close Encounters of the Third Kind. It was also during this time that it occurred to Brian Aldiss to re-read his short story It occurred to him that the story of a young boy rejected by his mother could be continued. And so he wrote the two follow-ups, Supertoys When Winter Comes  and Supertoys in Other Seasons.  After completion, he passed both short stories onto Spielberg, who liked the ideas presented in them and purchased the rights to the two stories Now, by an amicable arrangement with Warner Brothers, Spielberg had acquired all three Supertoy stories.
Read this book now
Download in formats: fb2 26k, epub 189k, mobi 113k, txt, html